An Obsession with Sand?

After a few posts you might ask yourself, why this preoccupation with Dakar?

Isn't Dakar, the capital of the African country Senegal on the west coast of the continent?
Yes it is, it also the finish line of the off road race, nicknamed Le Dakar, the starting point used to be Paris, France, more recently Barcelona, Spain, and Lisbon, Portugal.
Just to shake things up, one year, the organizers started in Dakar, and finished in Paris.

My first exposure to The Dakar, I was maybe 12 or 13 years old, Jan De Rooy competed with "De Koffer"(The Trunk). He finished 3rd in the truck category, and after that I was hooked.

I mean, come on, the biggest racing vehicles ever conceived bouncing around in the World's largest sandbox, this is the stuff dreams are made of.

4x4, 6x6 and even the massive 8x8 trucks racing each other in the Sahara Desert.

Baja it isn't, but Baja buggies and trucks are permitted to race the Dakar, but they have to adhere to certain technical specifications.

When I came back to the US, in 1987, I fell out of touch with the whole Dakar history, but since Speed TV used to carry coverage, and now OLN/Versus carrying it, I have gotten back to following the whole circus that is the Last Road Trip, The Legend.
The models, and the variety of news sources have just fueled my passion for this event, all available over the internet.

I invite everyone to experience The Dakar, and as they say Entrez La Légende Enter the Legend........
Posted by Rick at 8:18 PM No comments:

Cloning, The ultimate form of flattery?

I guess the title does say it all.
I have heard of people changing themselves to look more like their favorite Stars, but this might be a bit more novel.

I previously wrote about Minibox, and the popularity of the models.
Which in turn has spawned a whole bunch of fans to design their own versions, cars, trucks, farm equipment.
Some months ago, I came across http://www.minibox.webz.cz/, these guys are good, lots of great looking designs, and subjects.

Ivan Chmely, the designer of the Paper Case line, was the first person I started to collect and build, he released 3 Dakar models, and has a 4th listed.
This led me to try to find more models, one of the lines of models which has me drooling is the LBS System http://minibox.ic.cz/lbs_seznam.html .

These models rival the detail I have seen on the bigger 1:32 models I have.
There are about 14 models on the site, He also has a Liaz truck from the Munich to Marrakesh rally, and a Tatra 8x8 Kolos from the Truck Trial competition, I will expand on that topic in a future post.

The LBS System models need to be printed on A4 sheets, I tried it on Letter size, lets just say that it sucks doing it that way. 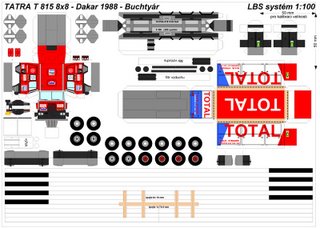 This is LBS' version of the 1988 Tatra 8x8 truck, one of the more recognizable vehicles in Dakar history.
Roman Hruska is working on a 1:32 version of this truck too. Almost like all those BF/ME-109 models that are out there...
Posted by Rick at 8:30 PM 1 comment:

Minibox, no, not mini boxes, Minibox.

Minibox, is a line of models designed by Milan Weiner, his models have been featured in the Czech kids/general knowledge magazine, ABC.
The scale of the models are 1:100, making most of the models 2 to 2.5 inches long, saves space for sure.

The models are usually one sheet, maybe a bit more, but allow for various levels of detail.
The basic version can be made up from one part or up to 3 or 4 parts.
Whereas the adult version can be detailed with doors and hatches, and even wheels.

Milan has designed 8 models with a Dakar bent, the first two models were models of two czech trucks which competed in the 1989 edition of the race.
One of the trucks was the truck in which Clay Reggazoni challenged the race in.

The Marlboro truck for those who were wondering :P.

Over the years, ABC has released and re-released some of the models. In July 2005 , they re-released the Mercedes Benz 1963AK, I am not sure of the original release date. 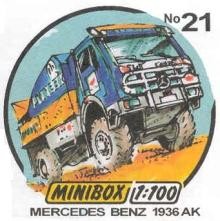 The first one Minibox model I did, just happen to be a Dakar, go figure right?

The model I started, and ultimately finished was the Tatra T815 8x8. I wrote a build review over at Cardmodels.net, visit it here http://www.cardmodels.net/forum/showthread.php?t=118

I have in the work bins one of two trucks which were released by WDS, Milan's design company, the trucks themselves represent the trucks which competed in the 1992 Paris Le Cap race, from what I read, and I need to do more on this version, the racers started in Paris, and finished down in Cape Town, South Africa.

The 8x8 and the Le Cap trucks are the only two sets of models which where published and sold in retail channels, the others, the 3 above and one unmentioned and the two published kits did see light in issues of the ABC magazines.

The Minibox line of models, range from the Dakar models mentioned above, to vans, cars, a sno-mobile, and tractor trailers, even a few double decker buses from London.
There is also a line of 1:300 models, one of the model kits represents a town in the Czech Republic, Podskali, there are also parts which make up the airport in Slatina.

I must admit that I did print the image of the two trucks and build both of them, I can only wish that ABC re-releases those models so that those who missed it, can get a copy.
Posted by Rick at 8:40 PM No comments:

I hate when that happens

I Suck, I know, I shouldn't have said that, but it is true in this case.
After I posted my first entry I did a search on ebay and google to see how far I was off on my plastic kit count, and I was off, boy was I off. There were kits I remember wanting, forgot about them, and then there are kits I didn't know which were released.

I said in my first post that there were 9 kits, I should have doubled that number and added 2.
Of the 20 kits that I have recalled, found, and have, I have 5 kits, to finish that part of my collection, I only need 15 more, not that bad a number, but I can only imagine what the cost would be.
And I haven't even started with the resin kits from Europe, then again, I never could get into resin as a modeler, but then again, nothing tried nothing gained.
Only major problem I see with me even starting to build these kits, is the massive outlay in paints, glue, filler and what ever else I do not have anymore. Maybe I have to wait until I have my own house, that way I won't choke or get high off the fumes, one of the bennies of paper modeling :)

I need to recount the preprinted kits that I have in my collection, maybe I am off on those also?
Posted by Rick at 8:37 AM No comments:

I am actually glad to be a paper modeler, I have found and bought numerous Dakar themed models.

The newer ones, are 3 snap tite kits from Revell Germany, a Race Touareg from Team Red Bull Volkswagen, an X-5 from Team X-raid, and a Nissan pickup from the Nissan factory team. I have only seen the Race Touareg at the local hobby shop, might pick that up someday.

In comparison, the free paper kits available nowadays is mindboggling, I would estimate that the free ones out number the plastic kits 5 to 1.

The published kits in my collection, usually bought from Czech paper model retailers, focus mainly on the Czech truck teams, which of course stands to reason.
I have all but two that I have noticed might be released soon, might need to place an order soon.
Posted by Rick at 9:19 PM No comments: