Bowling for the Bowler?

This is definitely not Oddjob's Bowler.......

I first encountered this beast, and there is no other word to describe it, and you will see why, in some of the TV highlights of the Dakar.

I also fell in love with the vehicle when Discovery started to air some of the Top Gear episodes here in the States.

Richard "The Hamster" Hammond gets to test drive the truck, and then he gets to the real bite of the Wildcat in the passenger seat.

You could spend the 50 thousand quid they mention in the clip for the real thing, or pop over to Bowler-Offroad and take a tour through the pages of History(hint). 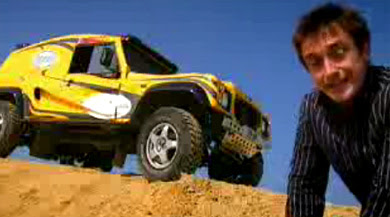 You can download 8 different colored versions of the Wildcat, and even the fast support truck.

You can also visit my friend Volker over on Racepaper.de and click through to his Dakar tab, and on the second page download the number 333 Bowler Wildcat driven by Freddy Loix in the 2006 Dakar.

A new Bowler is in the works, the Nemesis, based off the Range Rover Sport platform.
It is set to make its Dakar debut this year.