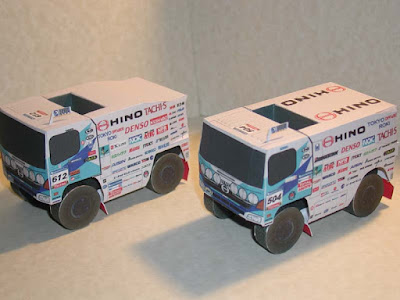 I have waiting in the on deck file, both of Yoshi's trucks, so when the mood strikes me to finish the team, it will also add nicely to my growing Japanese Dakar contingent.
Posted by Rick at 1:13 PM No comments:

Bowling for the Bowler?

This is definitely not Oddjob's Bowler.......

I first encountered this beast, and there is no other word to describe it, and you will see why, in some of the TV highlights of the Dakar.

I also fell in love with the vehicle when Discovery started to air some of the Top Gear episodes here in the States.

Richard "The Hamster" Hammond gets to test drive the truck, and then he gets to the real bite of the Wildcat in the passenger seat.

You could spend the 50 thousand quid they mention in the clip for the real thing, or pop over to Bowler-Offroad and take a tour through the pages of History(hint).

You can download 8 different colored versions of the Wildcat, and even the fast support truck.

You can also visit my friend Volker over on Racepaper.de and click through to his Dakar tab, and on the second page download the number 333 Bowler Wildcat driven by Freddy Loix in the 2006 Dakar.

A new Bowler is in the works, the Nemesis, based off the Range Rover Sport platform.
It is set to make its Dakar debut this year.

We have all read stories about people tweaking their diesel engined vehicles to run on various bio fuels, deep frying oil being the most used.

The Indy Racing League is for the first time running Ethanol, so it is no stretch of the imagination, that some of the other racing series and events would see an influx of bio-fuels.

To commenmorate the race, a paper model was released of the Landcruiser, you can visit http://www.ukyo-katayama.com/pari_dakar_paper_model.htm

The model is a nice simple model, nothing that will trip up anyone.

Enjoy, and maybe next time you are at a Japanese restaurant, and you order Tempura, the oil used might just power a race car.
Posted by Rick at 12:33 PM 1 comment:

I will try to use them in the future, on some of the more simple models, from Racepaper.de to see if what works, I'll keep you posted.
Posted by Rick at 1:30 PM No comments: 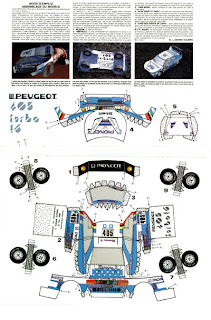 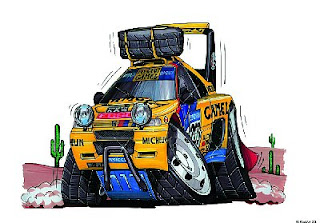 During the years from 1984 to 1991, the Dakar Car class was won by cars, prior to that, and since then, the Car class has been dominated by SUV based vehicles.
Posted by Rick at 8:04 PM No comments:

One of the best sites for Dakar models is Volker Preikschat's Racepaper.de.

Volker's Dakar models are a recent development for him, Volker is known for his excellent designed DTM and F1 models, his Dakar models rival the quality of those models.

One of the most exciting releases from Volker will be all the Car Winners from the first to the most recent Dakar races.
The first release will be the 1980 winning car, the VW Ilits.

I was planning on doing this similar thing in plastic, but I like this option alot better.
If like me, you want to follow the releases, visit Volker's Dakar site.
Posted by Rick at 9:20 PM 1 comment:

It is that time of the year again to drool over what others have built.

I am talking about the 10th Annual International Paper Model Convention.
Held this year at the Crowne Plaza Hotel in Dulles Virginia, USA.
The date for the main attraction is November 11th, we will be displaying what we have built from 10am to 6pm(18:00 for our miltary and non US friends)

Some of the biggest names of the hobby will be in attendance, A.G. Smith of Dover Publications, Digital Navy, Fiddler's Green, and many others.

This year I will be providing a live webcam feed of the event, which can be accessed at IPMC Webcam feed

I will also be posting some videos and stills of the event when time allows, maybe a few days after the event.

If you are curious as to what fun we have, you can check out My 2004 photo album or if you need more info check out IPMC 2006 website

Having written about Czech trucks and my history in The Netherlands.
I wasn't too surprised to see that some Polish teams decided to compete in the Dakar.

Two truck makes have competed in the Dakar, Star and Jelcz.
Both brands started competing in the race in 1986.
It seems that Star had better results, but I don't have a model of the Star race truck.....

I do have a copy of the Jelcz S 442, published by Mikrus, which from what I learned from Krys from www.papermodelstore.com that Jelzc owns Mikrus. 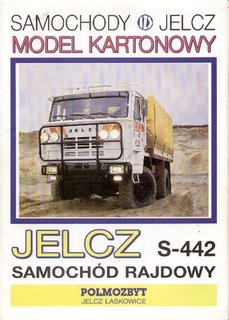 This kit is very rough, printed on thin chipboard(think the board in a dress shirt package)
The printing is not very sharp, lots overprinting, and some shifting of the ink.
The kit does have some good build diagrams, and the thin paper parts are printed properly.
One of the quaint(Sorry Scotty) things of this kit is the handdrawn nature of the model, reminds me of some of the ABC/Czech kits which I own.
The scale of this kit is bigger than the czech kits I have, 1:25 versus 1:32, all vehicle kits from Poland are in that 1:25 scale, brings me back to when I was building cars and trucks in that scale in plastic.

Not that it is much of a stretch, I have a 1:50 truck model, and I know of two other kits by Mikrus, one a bus, and the other a city square or statue kit, both of the vehicles are Jelzc machines. It is a cool concept, I wish more companies would do this, or contract with established designers or publishing houses.

I need to finish some models for the Paper Model Convention...Back to the Mat.
Posted by Rick at 9:23 PM 2 comments: 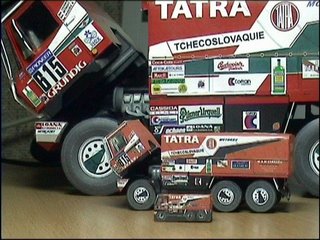 I guess I need to spend time with Photoshop Elements if I want to repaint a model, but then when do I have time to build that model???.......
Posted by Rick at 9:36 PM 3 comments:

Well..... not exactly, but close.
It is made of paper, and it has a design printed on it, is it a model, not exactly.

It is a jigsaw puzzle, not one but two.
To me jigsaw puzzles are another form of escape, just like making models.

Mom asked me last year, what did I want for Christmas, so I went looking for something Dakar related.
I stumbled onto two puzzles, one with 500 pieces and the other with 1500.
The 500 piece puzzle I bought myself, couldn't wait, the 1500 piece monster, I asked for that one.

The 1500 piece puzzle was drawn by Blauchon, a European artist, who does alot of comedic drawings, lots going on, all in one picture, and is published by Heye, a French puzzle company.

The 500 piece puzzle, published by Nathan, another French puzzle company, depicts a temple of some kind, in Africa.
The photo was taken by the official Dakar photographer, Maindru, it's their Toyota in the image.

These are the only two jigsaw puzzles which are Dakar themed, which I am aware of, so if you find one, let me know.
Posted by Rick at 1:29 PM No comments: